Continuing through Georgia on Thursday, I got more accustomed to the dog chases: most, even if they got into the road, seemed more inquisitive than ferocious and would stop once they were assured I was not going to go on their property. At one point even a dachshund gave earnest pursuit, though fortunately it was kept behind a fence.

I arrived in Nahunta, a town whose historic hotel building by the railroad tracks had been bought up and preserved by a husband and wife. She ran the hotel and he ran the adjacent barber shop; I patronized both.

On Friday, after sleep interrupted only somewhat by the passing freight trains (I knew these would be a factor going into my stay and would still recommend the hotel regardless), I continued through Folkston. There the railroad is even more central to the town: one has the option at staying in a furnished railcar, station house, or caboose (each even closer to the tracks than I had been). There was also a viewing platform at a track configuration called the “Folkston Funnel” where several railfans perched with binoculars.

I stopped at the Train Station Cafe: it was not quite open but the woman working there was happy to see a bike tourist stop by. She took my picture and gave me some cookies and muffins in exchange for some very small change and asked if I could mention the cafe on my blog, so I have now fully earned said cookies and muffins. 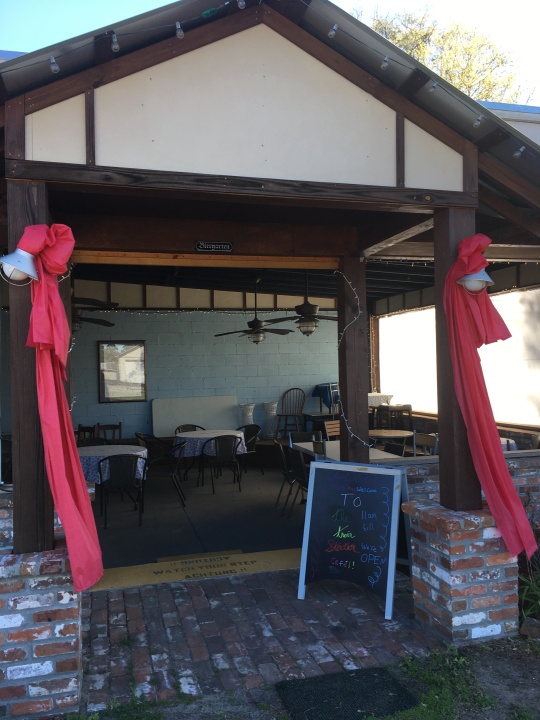 I then ambled my way towards a river bridge that marked the border with Florida. This crossing was more emotional than, say, the one into Delaware: perhaps because it is the southernmost state in the east, perhaps because a bicycle ride from New Jersey to Florida seems like a bit of a feat even without adding a western crossing.

After crossing the border, I stopped to grab a snack and refill my water bottles at a convenience store guarded by a rooster and abutted by a passive-aggressive sign about speed limits.

A few miles later I encountered a touring cyclist on the road for the first time on my journey. My host for the night had given a heads-up that he had stayed at their house the night before and that we would likely cross paths. We each pulled off to the side of the road and compared notes. He started in Houston and was on his way to Charleston. Not long afterward I saw another tourer who had begun in St. Paul, MN and was circling the lower 48 states. It sounds like I will start seeing more tourers on the Southern Tier route, which will be a contrast from my mostly solitary journey thus far. I am not sure which I will prefer, though in general the more cyclists on a given route the better that route becomes for cyclists.

I continued eastward towards Amelia Island, my destination for the evening. The maps overlapped with U.S. Bicycle Route 1.  This designation did not prevent construction crews from completely blocking the bike lanes with concrete barriers for dozens of stretches. For these portions they put up generally useless “share the road” signs on the side of the road, no consolation when I had to assert myself in two lanes of eastbound traffic with no shoulder. This went on for something like 11 to 14 miles but, following the construction, I made it to Jim and Pam’s house in Fernandina where they and their schnoodle Reese made for excellent hosts. 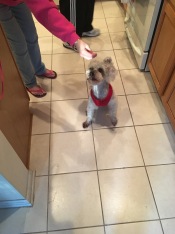 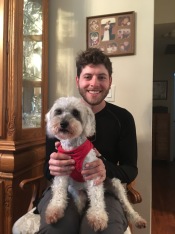 Saturday I had a relatively short ride to one last east coast ferry to Mayport. The roads to the ferry were often flanked by shaded paths and I paused to take in my last views of the Atlantic on my route. After the short ferry crossing I stopped at a restaurant on the river where I sipped iced tea while watching the resting pelicans and boats. I spoke to a fishingboat captain about my trip and the recent weather and continued towards Jacksonville, pausing to watch a container ship pass by on the river.

Not much later I arrived in Jacksonville for a couple days’ break to visit family and relax a little before the journey continues tomorrow. I’ve cycled about 1,200-1,300 miles so far; only 3,000 or so to go!