When I arrived on Ocracoke days ago as the sun was setting, I passed a field where someone on a stretcher was being loaded onto a medivac helicopter. Later that night a bartender told me her boyfriend had left the island shortly after they both relocated there, comparing it to Alcatraz because of its limited accessibility. Coming down the east coast, moments like this, where the remoteness of a place led to thoughts of what would need to be done in an emergency, were rare. Not to say the hazards of the road did not loom in my mind in more connected areas as well: indeed, denser places also have a way of reminding you of what could lie ahead.

A couple days ago I left the goat farm, now inactive, after again receiving mindful and warm hospitality from my hosts, one of whom asked me, as she does for all her guests, to send a postcard at the end of my journey so she would know I arrived safely. 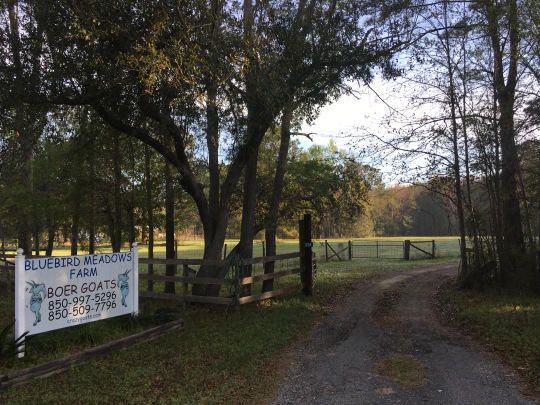 I then continued past an active goat farm, albeit one with inactive goats.

I wheeled on towards Tallahassee, where a man on a recumbent shared an inspiring story about himself and gave me tips about local bike shops. I stopped at one en route (my shifter indexing needed adjustment) and talked to the mechanics there, one of whom pointed me to a vegan cafe for lunch: I figured I may not see another one of those for a while so I stopped in and had a nice meal and respite from the heat of the day.

The sun was still up when I arrived in Chattahoochee (it was not as hot as Alan Jackson said it could get) and I paused for a while near a redundant sign before making the short descent to the city campground when it had set further.

The park adjacent to the campground seemed like a good spot to relax, next to the river with a view of the dam at Lake Seminole, but I had to turn away before dusk faded away to set up camp.

The campground itself was among the most spartan so far: no other tents there and I had to double-check the map to make sure I was in fact in the tent area. There were no picnic tables, so I propped the bike against a wood-and-metal apparatus of the park’s FitTrail, the exact same installations as those installed long ago at a playground in the town on Long Beach Island that was my starting point. Gulf Coast insects were living up to their reputation; thankfully, none made it into the tent. As such, I perused the zine they (of course) had on hand at my lunch spot in Tallahassee before falling asleep shortly after dark.﻿ 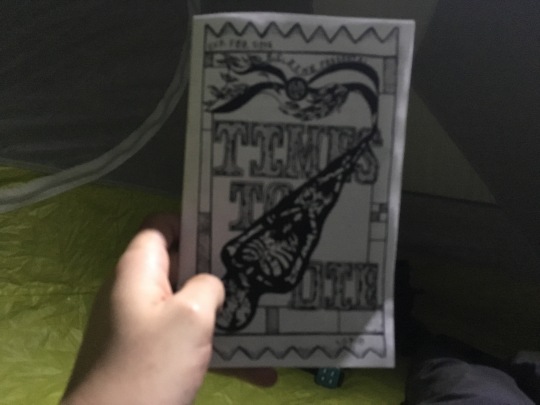 I left early, which became even earlier as I crossed the river into Central Time. Since daylight savings would negate the change in a couple days, I did not adjust my clocks.

Behind me the sun leapt over the horizon into the clouds.

I knew this trip was most likely going to end one of two ways, each arbitrary in its own way. Those of you thinking about an adventure like this should be assured that most who set off on these journeys (there are more than you would think) reach the planned and preferred endpoint, and perhaps I will too. But once there I know my mind would ask me, “why not keep going?” Now the second possibility has instead struck, but I am wildly fortunate to still be able to entertain that question for the future. (I know the exact spot from which to proceed anew should the opportunity present itself.)

The full weight of the journey has not hit me yet, but I have seen so much I did not realize was out there and met (and revisited) so many kind and generous people. Passing interactions with people on the streets and in towns and cities were almost universally positive. All of that will stay with me and, I hope, continue to inform how I treat others going forward.

At other times, though I have not been candid here, I have been appalled and enraged by what I saw: strictures that should have been waylaid to the distant past are undeniably keeping a firm hold. While this is also true of where I grew up and where I live, en route it manifested itself in ways that I had not seen firsthand before and will not forget.

For many miles I thought about the freedom to roam about like this. Far too few people have the means and the option to do so if they would like, many of whom would question whether they could even feel comfortable or safe while making their way. On the road I thought about what I can do to, in some small ways, help correct this. A simple thought at first but it quickly becomes a broad and daunting mission. A bicycle tour offers an approach for this sort of thing, though: you know where you stop at the end of the day, so you know where to continue on the next one.